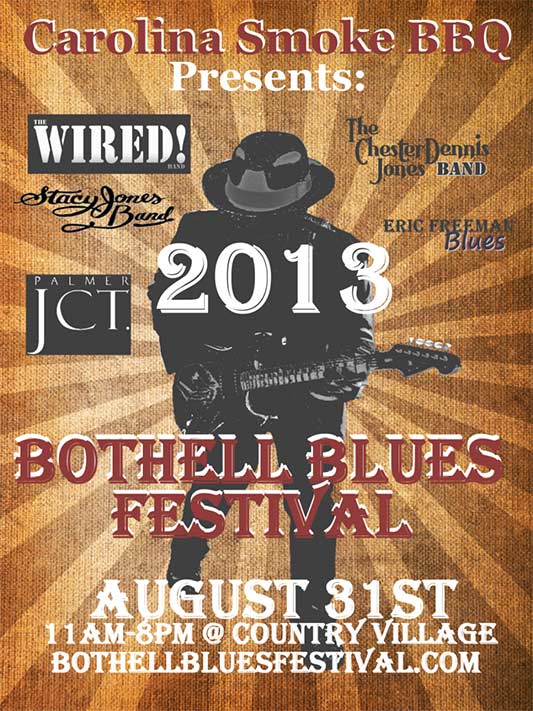 Seattle’s “The WIRED! Band” won the 2012 INTERNATIONAL BLUES CHALLENGE on Beale Street in Memphis playing the HISTORIC DAISY THEATER, HARD ROCK CAFE and B.B. KINGS before winning the Finals in front of a packed house at THE ORPHEUM THEATER.

The Wired! Band features Washington Blues Society Performer of the Year and Songwriter of the Year Kevin Sutton with perennial Pacific Northwest rhythm kings Rick ‘the stick’ Jacobson on drums and his uncle Seattle legend Keith Bakke on bass.

Get out and see the WIRED! Band for their sweet and soulful take on the American art form we call “THE BLUES”.

Blues Band, The Chester Dennis Jones Band are a group of friends who got together and decided to make some music. Each band member brings his own knowledge and understanding of the blues. Bringing these guys together in one group was a great thing.

With three different singers, dual lead guitars and one of the best rhythm sections around, Palmer JCT is one band that you will not want to miss. The members are heavily influenced by blues artists such as Freddie King, Peter Green, Eric Clapton, the Allman Brothers, Robben Ford, Joe Bonamassa, Janis Joplin and of course, Jimi Hendrix. While heavily influenced by all styles of the Blues, Palmer JCT’s original music also has hints of every individual members’ personal tastes and styles, giving it a unique sound.

Eric Freeman brings his Virginian based piedmont blues style to the Northwest. A refreshing sound of great old school blues. A great way to kick off the Bothell Blues Festival.